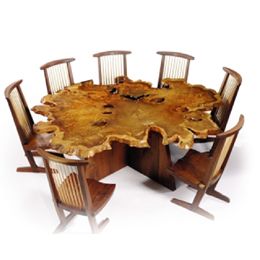 “Each flitch, each board, each plank can have only one ideal use. The woodworker, applying a thousand skills, must find that ideal use and then shape the wood to realize its true potential”- George Nakashima.

Born 24 May 1905, George Nakashima became one of America’s leading innovators of 20th century furniture design and a founding father of the American Craft Movement. After growing up in Spokane, Washington, George graduated with a Bachelor of Architecture in 1929 and earned his Master’s degree in 1931.

After gaining his degree George purchased a round the world tramp steam ship ticket to explore the world’s different architecture. He lived in France, North Africa and eventually moved to Japan. In Japan, George starting working for an American Architect, Antonin Raymond. Working for Antonin enabled George to travel around Japan where he studied Japanese architecture and design.

In 1937, George went to India for Antonin where he was the primary construction consultant to build a dormitory. It was in India where he made his first piece of furniture.

Returning to America in 1940 George began to make and teach woodworking. With the outbreak of the Second World War, like many others of Japanese ancestry, George was interned to Camp Minidoka. It was at this camp where he met Gentaro Hikogawa, a traditional Japanese carpenter. It was Gentaro who taught George to master traditional Japanese hand tools and joinery techniques. Not only did George learn new skills but his approach to woodworking evolved with discipline and patience, striving for perfection in every stage of construction.

In 1943, George Nakashima was released from the internment camp by Antonin who invited him to his farm in New Hope, Pennsylvania. It was here where he explore the organic expressiveness of wood and choosing boards with knots, burls and figured grain.

Over the decades George’s work became sought after with his signature woodworking design being his large scale tables made of large wood slabs with smooth tops but unfinished natural edges, consisting of multiple slabs connected with butterfly joins.

In 1983, George Nakashima was granted the Order of the Sacred Treasure, an honour bestowed by the Emperor of Japan and the Japanese government. George’s home, studio and workshop near New Hope, Pennsylvania, was listed on the US National Register of Historic Places in August 2008 it also designated a National Historic Landmark 6 years later.